Day 1 • Warsaw
Arrival. Meeting your tour leader, your personal Poland travel expert. Directly from the airport we go for half day city tour in Warsaw. We visit the Warsaw Jewish Cemetery (one of the biggest Jewish cemetery in the world and one of the last remaining open and active Jewish cemetery in Poland), former territory of little ghetto, Umschlagplatz – square where Jews were gathered for deportation from the Warsaw Ghetto to the Treblinka extermination camp. In 1988 national monument was erected at Umschlagplatz to commemorate the deportation of victims.

Day 2 • Warsaw - Lublin
After breakfast we take a walk through Memorial Route of Jewish Martydrom and Struggle, which commemorates people and places of the Warsaw Ghetto during the German occupation of Poland. The route begins at the Warsaw Ghetto Monument and ends near the Umschlagplatz monument. Then we visit The Museum of the History of Polish Jews, which is a giant unique multimedia exhibition newly opened in 2013. It shows 1000 years’ history of Polish Jews – from the Middle Ages until today. Then we transfer to Lublin, where we have a short stroll to see the Old Town Market, Old Town Hall and the castle.

Day 3 • Lublin - Majdanek - Kraków
After breakfast we visit Majdanek – former nazi concentration camp, which is situated in the suburb of Lublin. It was established in 1941 as a work camp and changed in 1943 into a concentration camp. The camp, where lived 150 000 prisoners from nearly 30 countries, occupied an area of 270 ha. Among prisoners dominated Polish citizens (mainly Poles and Jews). 80 000 people, including 60 000 Jews, were killed there during World War II. After visit we transfer to Kraków.

Day 4 • Kraków
After breakfast we visit Kazimierz quarter – between 16- 18th century it was a major European center of the Diaspora. Kazimierz together with Wawel and the Old Town in Kraków is listed on UNESCO World Heritage List. We visit Remuh synagogue, the Jewish cemetery and Podgórze Ghetto. Then we go to Wawel Royal Cathedral - for centuries a burial place of Polish kings.

Day 5 • Kraków - Oświęcim - Warsaw
After breakfast we drive to Oświęcim to visit Auschwitz- -Birkenau museum, former nazi concentration camp, which is listed on UNESCO World Heritage List. The Auschwitz concentration camp complex was the largest of its kind established by the Nazi regime. About 1 million Jews were exterminated there during World War II. We have a 3,5 hour long walk with a local guide. Next we drive to Warsaw Chopin Airport.


* per person in twin/double, with minimum 40 persons, price includes: accommodation in 3* hotels on HB basis, coach transfers as per program, local English/German speaking guide, price does not include: flight tickets, travel insurance, entrance fees (approx. 25 EUR), other meals and beverages. Remark: this quote is subject to availability based on the final dates of the tour and needs to be confirmed. 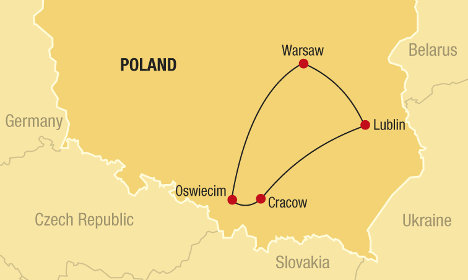