Day 2 • Warsaw
The day starts with a tour covering the best of Warsaw. First the Old Town, listed on UNESCO World Heritage List after reconstruction from the rubble of World War II. In the afternoon we travel the Royal Route to the Royal Łazienki Park, romantic park complex, Warsaw’s most attractive green area with a magnificent Palace on the Water. After that we visit the ultra-modern Warsaw Uprising Museum, which commemorates the Uprising of 1944, the single most important event that has defined today’s Warsaw.

Day 3 • Warsaw – Kazimierz Dolny – Kraków
After breakfast departure towards Kraków. On our way we stop in Kazimierz Dolny, one of the most charming little towns in Poland situated on the right bank of the Vistula River, a town that inspires artists. We take a ship cruise on the Vistula River and have time to walk through the town and visit art galleries. Arrival to Kraków. In the evening stroll in the historic center of Kraków, the former capital of Poland listed on UNESCO World Heritage List.

Day 4 • Kraków
After breakfast we visit Wawel Royal Castle – residence of Polish kings through almost 600 years with its Royal and State Apartments, Wawel Royal Cathedral - for many centuries a burial place of Polish kings. Then we go to Market Square with Renaissance Cloth Hall where you can buy numerous souvenirs, Gothic St. Mary’s Basilica and Collegium Maius, the oldest college of Jagiellonian University, founded in 1364. In the evening stroll in Kazimierz district - the center of Jewish life in Kraków for over 500 years with synagogues and Jewish cemeteries. Dinner in Jewish restaurant.

Day 5 • Wieliczka – Budapest
After early breakfast departure to Wieliczka. Visiting the 700-year-old Wieliczka Salt Mine (on UNESCO World Heritage List), an unforgettable three kilometers of underground chambers, caves, chapels and statues all sculptured from salt. Mining salt, which was called “white gold” in middle ages, contributed to a great development of Kraków. Arrival to Budapest (on UNESCO World Heritage List). We go to panoramic point situated on Gellert Mountain to see a lovely view of the whole city.

Day 6 • Budapest
After breakfast we visit St. Stephen’s Basilica and building of Parliament – the landmark of Hungary and the largest building in the country. We drive through Andrassy Avenue, Millennial Monument on Hero’s Square to visit Vajdahunyad castle. Later we have traditional folk dinner at local restaurant (csarda).

Day 7 • Budapest
After breakfast transfer to Budapest Airport for your return flight.


* per person in twin/double, with minimum 40 persons, price includes: accommodation in 3* hotels on HB basis, coach transfers as per program, local English/German speaking guide, price does not include: flight tickets, travel insurance, entrance fees (approx. 50 EUR), other meals and beverages. Remark: this quote is subject to availability based on the final dates of the tour and needs to be confirmed. 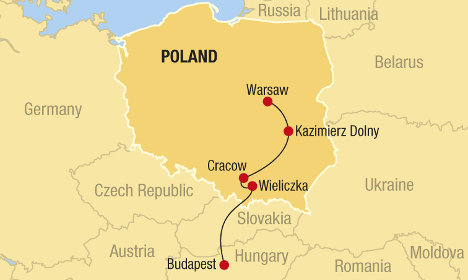