Day 2 • Warsaw
The day starts with a tour covering the best of Warsaw. First the Old Town, listed on UNESCO World Heritage List after reconstruction from the rubble of World War II. Then the Via Regia or Royal Route linking the Royal Castle to Wilanów Palace. We also take you to the Royal Łazienki Palace Park, a magnificent palace and park complex, Warsaw’s most attractive green area. After that we visit the ultra-modern Warsaw Uprising Museum, which commemorates the Uprising of 1944, the single most important event that has defined today’s Warsaw.

Day 3 • Wieliczka / Kraków
After breakfast departure to Wieliczka. Visiting the 700-year-old Wieliczka Salt Mine (on UNESCO World Heritage List), an unforgettable three kilometers of underground chambers, caves, chapels and statues all sculptured from salt. Mining salt, which was called “white gold” in middle ages, contributed to a great development of Kraków. Arrival to Kraków.

Day 4 • Kraków
After breakfast we visit Wawel Royal Castle – residence of Polish kings through almost 600 years with its Royal and State Apartments, Wawel Royal Cathedral - for centuries a burial place of Polish kings, Market Square with Renaissance Cloth Hall with numerous souvenirs, Gothic St. Mary’s Basilica, Collegium Maius, the oldest college of Jagiellonian University, founded in 1364. The historic center of Kraków, the former capital of Poland, is listed on UNESCO World Heritage List. In the evening arrival to Zakopane.

Day 5 • Zakopane
We start with a stroll along Krupówki Street - one of the best-known Polish promenades and attracting visitors from all over the world. Next we take a ride up a funicular railway to the top of Gubałówka Hill to see a panorama of the Tatra mountains. After a walk around the peak we return to visit the oldest parts of Zakopane - beautiful timber lodge of Villa Atma with its archetypal Zakopane style architecture (now used as a museum) and the famous cemetery “Na Pęksowym Brzysku” with many “gravestones” in the birch grove made of wood. These graves are considered to be supreme works of arts. Evening relax in a local restaurant with live music of the highlander band.

Day 6 • Zakopane / Wrocław
After breakfast we depart to Wrocław. In 2016 it is the European Capital of Culture that is why program of cultural events such as concerts, festivals is bursting at the seams during the whole year. We start sightseeing in Cathedral Island full of narrow lanes, gas lamps and countless bridges. From the cathedral tower we see a great panorama of the city. We visit also University district to see the historic academic headquarters of the city’s main college. On our way there is the old butchers’ lane with its quaint shops and the heart of the city - the Old Town with Gothic City Hall and the oldest restaurant in Europe in City Hall’s basement.

Day 7 • Wrocław / Warsaw
In the morning free time in Wrocław (if time permits depending on the schedule of return flight). In the afternoon departure to Chopin Warsaw Airport.


* per person in twin/double, with minimum 40 persons, price includes: accommodation in 3* hotels on HB basis, coach transfers as per program, local English/German speaking guide, price does not include: flight tickets, travel insurance, entrance fees (approx. 55 EUR), other meals and beverages. Remark: this quote is subject to availability based on the final dates of the tour and needs to be confirmed. 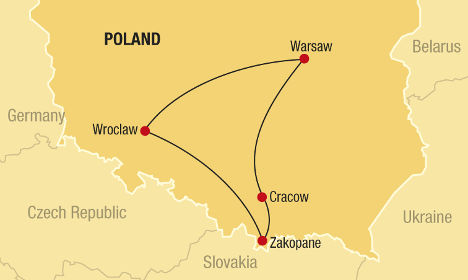