Day 2 • Warsaw
After breakfast we visit the ultra-modern Warsaw Uprising Museum, which commemorates the Uprising of 1944, the single most important event that has defined today’s Warsaw. Then we go for a walk to Powązki Cemetery to visit “Avenue of Notables” and graves of well-known Poles (Władysław Reymont, Krzysztof Kieślowski, Czesław Niemen, parents of Fryderyk Chopin). In the afternoon we travel to the Royal Łazienki Park to have a stroll through romantic park complex, Warsaw’s most attractive green area and visit a magnificent Palace on the Water. Optional: Chopin piano recital in the evening.

Day 3 • Warsaw – Malbork – Gdańsk
After breakfast we transfer to Malbork, probably the largest medieval castle in Europe. Built in the late 13th century, as Marienburg, to serve as the residence of the Grand Masters of the Knights of the Teutonic Order. This imposing red-brick fortress consists in fact of three castles and is rightly listed as a UNESCO World Heritage site. After that arrival to Gdańsk.

Day 4 • Gdańsk
After breakfast, on the way to the Old Town of Gdańsk, we stop at the famous Gdańsk Shipyard, the birthplace of the Solidarity movement led by Lech Wałęsa and see the European Solidarity Centre. Gdańsk’s past as the richest Polish port city has made it one of the top tourist destinations in Poland. We explore St. Mary’s church, climb to the top of the tower and see the magnificent view of the whole city. We visit Long Street and Long Market. After that we have free time to visit amber workshops and galleries. In the evening we take a ship cruise to Westerplatte famous for the first battle of the World War II.

Day 5 • Gdańsk – Sopot – Gdynia – Słowiński National Park
After breakfast we travel to Sopot. Sopot, the most popular Polish seaside spa and resort, quaint and sophisticated, known for being the ‘Monte Carlo’ of the Baltic. We have a stroll on the longest wooden pier in Europe. After, we take you to the Emigration Museum in Gdynia which is housed in the historical building of the Marine Station, where thousands of emigrants started their way for American dream in interwar. In the afternoon we have a stroll on “moving dunes” in Słowiński National Park.

Day 6 • Gdańsk – Kraków
After early breakfast we transfer to Gdansk Lech Wałęsa Airport for a flight to Kraków. The historic center of Kraków, the former capital of Poland, is listed on UNESCO World Heritage List. We visit Wawel Royal Castle – residence of Polish kings through almost 600 years with its Royal and State Apartments, Wawel Royal Cathedral - for many centuries a burial place of Polish kings. Then we go to Market Square with Renaissance Cloth Hall where you can buy numerous souvenirs, Gothic St. Mary’s Basilica and Collegium Maius, the oldest college of Jagiellonian University, founded in 1364.

Day 7 • Kraków – Oświęcim – Wadowice – Kraków
After breakfast we drive to Oświęcim to visit Auschwitz- -Birkenau museum, former nazi concentration camp, which is listed on UNESCO World Heritage List. The Auschwitz concentration camp complex was the largest of its kind established by the Nazi regime. About 1 million Jews were exterminated there during World War II. We have a 3,5 hour long walk with a local guide. In the afternoon we visit Wadowice, the birthplace of Pope John Paul II, his family’s house and the church where he was baptized. We have an opportunity to try Pope’s favorite cake in the local bakery.

Day 8 • Kraków – Wieliczka – Zakopane
After breakfast departure to Wieliczka. Visiting the 700-year-old Wieliczka Salt Mine (on UNESCO World Heritage List), an unforgettable three kilometers of underground chambers, caves, chapels and statues all sculptured from salt. Mining salt, which was called “white gold” in middle ages, contributed to a great development of Kraków. Arrival to Zakopane. We take a stroll along Krupówki Street - one of the best-known Polish promenades attracting visitors from all over the world. Next we take a ride up a funicular railway to the top of Gubałówka Hill to see a panorama of the Tatra mountains. Evening relax in a local restaurant with live music of the highlander band.

Day 9 • Zakopane
After breakfast we take a walk to Morskie Oko (Sea eye) lake – the largest lake in the Tatra Mountains. After that we visit the oldest parts of Zakopane - beautiful timber lodge of Villa Atma with its archetypal Zakopane style architecture (now used as a museum) and the famous cemetery “Na Pęksowym Brzysku” with many “gravestones” in the birch grove made of wood. These graves are considered to be supreme works of arts. We visit also the Sanctuary of Our Lady of Fatima in Krzeptówki, which is built as a highlanders’ thanksgiving for saving of the life of Pope John Paul II after the assassination attempt in 1981. Optional: in the evening rest in the Polish greatest thermal spas in Bukowina.

Day 10 • Zakopane – Częstochowa – Warszawa
After breakfast we depart to Warsaw. On our way we stop in Częstochowa – spiritual capital of Poland and the country’s greatest place of pilgrimage. We visit Jasna Góra Sanctuary to see the miraculous icon of Virgin Mary. Then transfer to Warsaw Chopin Airport.


* per person in twin/double, with minimum 40 persons, price includes: accommodation in 3* hotels on HB basis, coach transfers as per program, local English/German speaking guide, price does not include: flight tickets, travel insurance, entrance fees (approx. 110 EUR), other meals and beverages. Remark: this quote is subject to availability based on the final dates of the tour and needs to be confirmed. 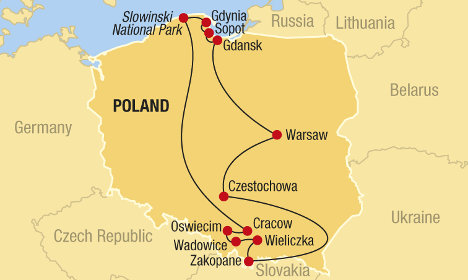